The following people and subjects play a role in Improbable Collapse. Follow the links to learn more about each.

(These screens are also included on the DVD, along with extras and previews. Photos on the following pages, if not otherwise labeled, are by John Gannon.)

We found two online resources were particularly indispensable as for understanding the events of September 11, 2001.

“911Truth.org honors and follows the September 11th families who fight for full disclosure; the first responders who paid the ultimate price; the Ground Zero workers who risked their health in the aftermath of the disaster; the New Yorkers and others who were primary targets of the trauma and psychological warfare of 9/11/2001; the researchers who are rigorous in logic and relentless in running facts to ground; the whistleblowers and eyewitnesses speaking out against the September 11th cover-up; and all citizens of courage who are ready to come forward in the fight for justice and truth. 911Truth.org looks not to create a new conspiracy industry, but to achieve full disclosure of hidden realities that affect all of our lives, that we may finally be sovereign as a democratic people.”

Paul Thompson’s ‘Complete 9/11 Timeline‘ is an indispensable resource for anyone looking into the truth of 9/11 as a day, as a period, and, alas, as the beginning of an era. Originally a database-driven presentation on the Cooperative Research website, the Timeline has also recenly been published by HarperCollins in paperback form as The Terror Timeline. (Michael Richardson)

“Our intelligence agencies should be recruiting people like Paul Thompson, because he’s brilliant.”

By relying solely on confirmable fact and mainstream reports, the timeline’s exhaustive collection of evidence is all the more powerful as a resource for those who have come to doubt the official account. 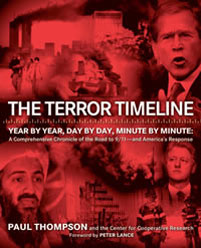